What is TCPA and Why Does it Matter to You? 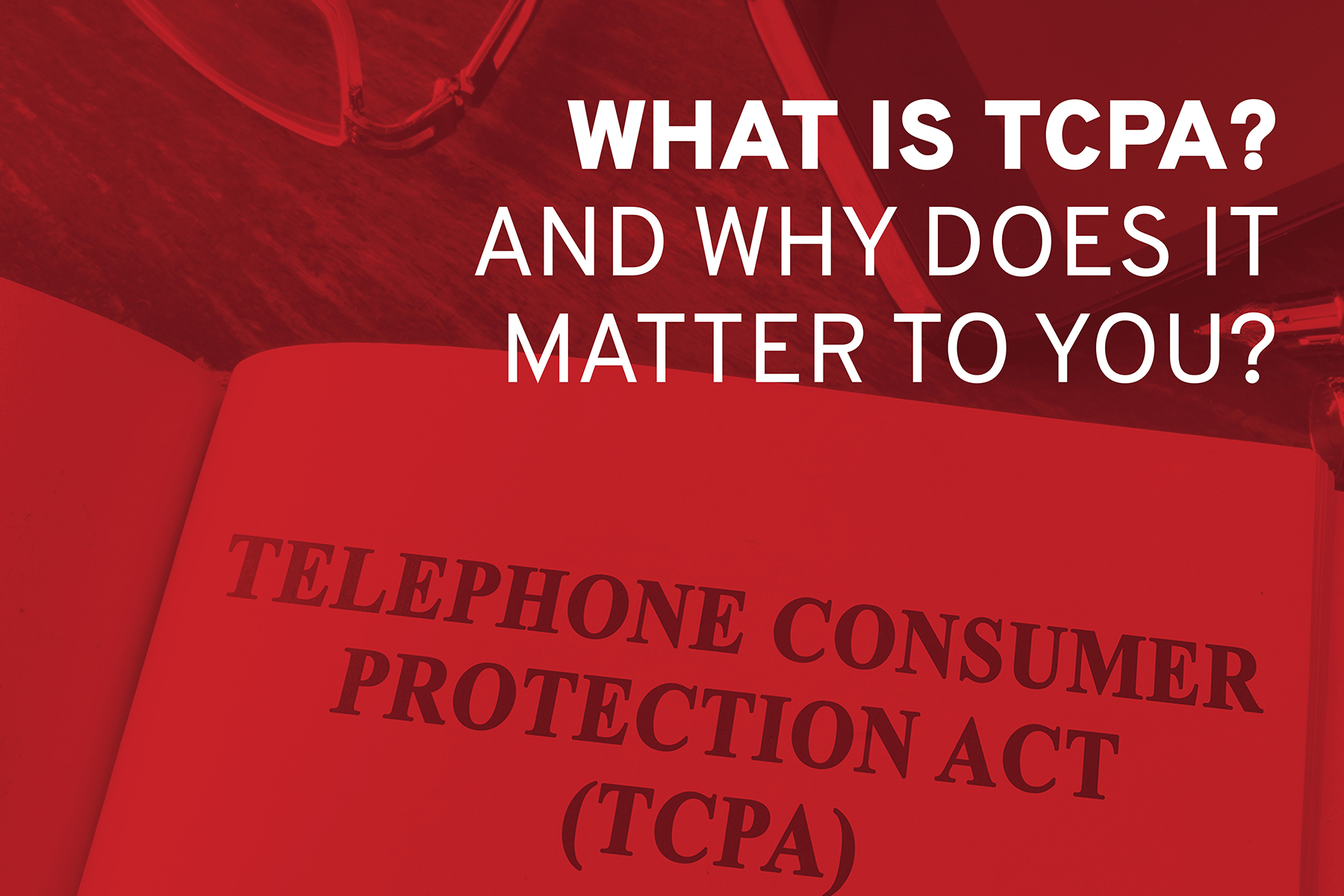 You need to know about the Telephone Consumer Protection Act (TCPA), or it could cost you untold amounts of money. In this article, we’re going to explain the origins of SPAM, how and why the TCPA was enacted, who it affects, and what to do to make sure you’re 100% legally compliant.

The History of SPAM

When we think of SPAM, we often immediately relate it to email. But the true birth of SPAM goes back way further in history than that. Let us take you on a trip, and give you a history lesson about unwanted messages that may surprise you. Witness the birth and evolution of one of the most annoying things ever invented by journeying through the history of SPAM.

What is SPAM, Really?

Firstly, what is SPAM? For its definition in this article, we’re not going to tie it to a specific medium. SPAM is simply the mass transmission of unwanted messages (of any kind).

Unwanted mass messages are older than you think. The first true SPAM message predates email by more than a hundred years. Here’s the story. A couple of dentists known as the Gabriels sent a mass telegraph to a large number of people that essentially said (totally paraphrased): “Hey everyone, we’re the Gabriels. We’re dentists, and we’ll be at 27 Harly Street in Cavendish Square until October, working on teeth from 10 am to 5 pm each day”

The message got many, many complaints, and was the official birth of SPAM (by our definition set above).

Note: Save yourself a Google, “Messrs” is the abbreviation for “misters” (which is hilarious, because it’s only one letter shorter, but I guess when you’re paying by the letter…)

SPAM Continued Throughout the Years

In 1978 Gary Thuerk sent the first SPAM email. At the time, only around 2,600 people even had email accounts. But his email about his company’s new computer reached 400 of those people, and Thuerk claims to have made $12 million dollars in sales from the message.

It wasn’t until the early 1990’s that SPAM sprang up again in a huge way. It was on something called USENET, which was a predecessor to the internet as we know it today. UESNET was a discussion system that acted as a mash-up of what we know today as web forums and email. Richard Depew was trying to update the system with new functionality and sent more than two hundred messages to users on USENET accidentally.

Once Depew’s mistake revealed how many people could be reached in this way, the rest was history and SPAM became a mainstream, annoying way to reach people en masse. From the mid 1990’s until the mid 2000’s, SPAM ended up making up 80 to 85% of all emails sent globally. By 2014, SPAM messages had reached nearly 183 billion per day– and the number isn’t slowing down.

But Wait, Where Did the Name SPAM Come From?

Some claim that the name SPAM comes from a Monty Python’s Flying Circus sketch where Vikings in a cafe were loudly singing the word “SPAM” repeatedly, drowning out the other patrons (see the metaphor?). But more tangible evidence shows that the term was first used when Depew made his USENET error. While joking about the mistake, someone referred to it as “spamming” and the name stuck.

Spammers Take to the Phones

Email isn’t the only communication medium that has suffered at the hands of SPAM. Once the concept of SPAM began to take hold in the early 90’s, shady folks everywhere started using any form of communication they could get their hands on to reach people with their unsolicited marketing messages. One of the mediums that suffered the most was the telephone.

Around this time, more than 90% of homes in the United States used land-line telephones as their primary method of communication. Cell phones were in their infancy and very rare (with only 3% of people in the US having them).

So the spammers took to the phones, and wreaked havoc on landlines across the country. It was a nightmare. Up until then, people would most often only get phone calls from trusted sources. So when SPAM calls started happening, so did an increase in fraud. Many people were swindled out of money, or cheated in some other way through these heinous phone calls.

More and more companies were using available technology that allowed phone numbers to be automatically dialed, and for a pre-recorded message to be delivered (known as “robocalls”). And it didn’t stop with phone calls– an increased amount of people and businesses were using fax machines too. Spammers were sending tens of thousands of unsolicited junk faxes every week.

As robocall software become even more affordable and easier to use, the end was nowhere in sight. A blend of scammers and legitimate telemarketers were making tens of millions of robocalls each day, and the American public was fed up.

The slew of telecommunication SPAM was making it harder for anyone trying to legitimately communicate with one another to connect. People were having their time wasted, and were even getting afraid to answer their phones. Many people were spending extra money for early caller ID features, and were screening calls through answering machines.

Consumers were getting more and more fed up as they were being inundated with a barrage of unsolicited marketing and sales calls. Certain states put laws in place, but it couldn’t stop telemarketers and spammers that were operating on a national level.

The ire of the American people hit a fever pitch, and something needed to be done. It wouldn’t be long before the Telephone Consumer Protection Act would be born.

The Birth of the TCPA

After much deliberation and reviewing ten different pieces of legislation, Congress finally passed the Telephone Consumer Protection Act in 1991. It was to stop the “voluminous consumer complaints about abuses of telephone technology—for example, computerized calls dispatched to private homes.”

It primarily stops telemarketers from using specific types of automated phone equipment, and limits automatic dialing, certain uses of recorded messages, and restricts fax (and eventually SMS) usage. The core pillar of the TCPA is consumer consent. Without explicit consumer consent, there are strict rules in place for when and how a customer can be contacted (if at all).

The Evolution of the TCPA

As technology expanded, TCPA needed to be updated, In July of 2015, the FCC released an update known as the TCPA Declaratory Ruling and Order. It redefined some rules and gave further clarity to consumer rights. Some factors that changed were:

Urgent Circumstances: In some urgent cases, companies could send SMS messages or call cell phones without formal prior consent. These reasons include reminders of medication refills or fraud alerts, for example. An opt-out option must be included with these urgent messages.

Permission Is Person Specific: If a phone number is reassigned to a new person permissions don’t stay with the number. The new owner of the number must give new consent.

Permission is Reversible: Any person can remove or revoke their consent at any time– it’s up to them.

Phone Carriers Can Now Block: Phone carriers were allowed to offer internal robocall blocking services to any of their users.

Wireless Phones Were Explicitly Added: Telemarketers were unable to use any automated dialing systems and leave recorded messages on mobile/wireless phones without consent.

Who Does the TCPA Affect?

This affects any business that is using telephones (landlines and mobile), faxes, and SMS messaging to contact their customers. If you are reaching out to any of your customers in this way, even if the message isn’t directly marketing-related, the TCPA still applies to you.

What Happens if I’m Not Compliant?

If you don’t follow the policies set in place by the TCPA and don’t have client consent before contacting them, you can face legal repercussions that can be very serious, and expensive. Violations can result in fines that start at $500 dollars, and can climb up to $1500 dollars per illicit text.

This is intended to be a guide, and not legal advice (and it will help you get started on your journey to being TCPA compliant). Here are some things to consider to stay on top of your TCPA compliance.

Written customer consent is the most important thing. First and foremost, the TCPA is all about consent. None of these other details matter if you don’t have the full, provable, written consent of customers that they are okay with you contact them.

If you do have that full, written consent, here are some other guidelines:

These are just starting points, but they should keep you out of trouble as you learn more about TCPA compliance. A rule of thumb that will help: if you’re unsure, don’t risk it.

You Need Validiform to Protect Yourself

It’s important to note that even if you do have a client’s consent, they can still report you and the burden of proof will be on you. You can follow every single guideline of the TCPA to the letter but still be called into question for breaking the rules. And if you can’t prove you had the customer’s consent, you’ll be wrongfully fined. Sadly, it happens far too often.

Not to mention that there are entire law firms that are dedicated to gathering as many people as they can who have suffered from a TCPA violation, and then suing a company like yours for every single violation combined. When they’re compounded like this, these fines can reach staggering numbers and could ruin your company.

Don’t take these risks. You need to protect yourself with Validiform.

Validiform allows you to track a user’s full experience on your landing page or website, and record video proof whenever they fill out a web form.

That video proof is then stored on our servers safely and securely. If you’re ever accused of breaking TCPA compliance, you’ll be able to easily retrieve the video evidence from our servers and prove your innocence.

Not only is Validiform very affordable, it’s also loaded with a number of features that no other software of its kind can match for the price.

Validiform is simple to set up, and our in-house support team is here to help with anything you might need.

Don’t risk information gaps that could surface when you use non-video proof of consent. Protect yourself with the industry standard in TCPA compliance.