The 5 Biggest TCPA Lawsuits In History 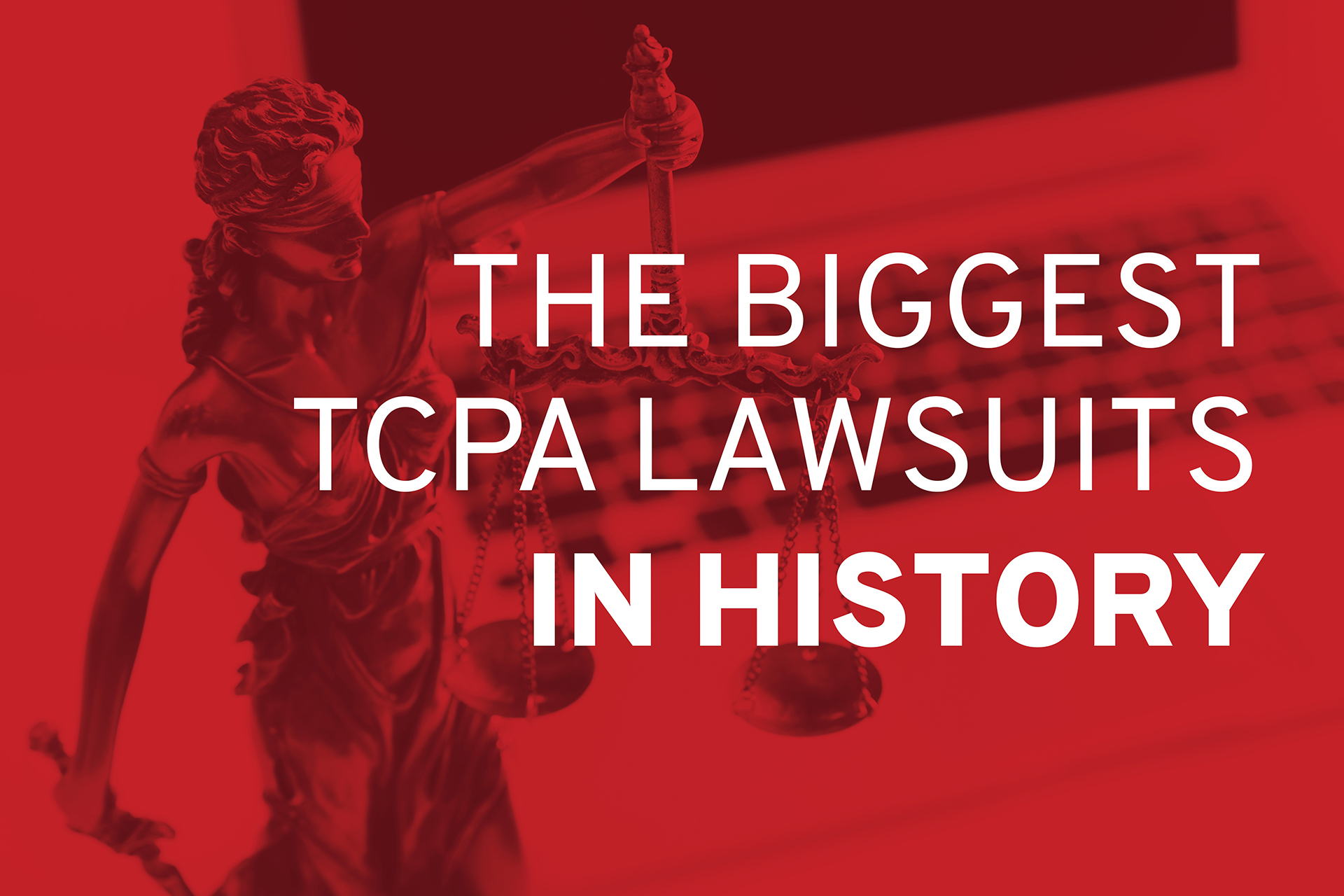 If you do any form of telecommunications marketing, you’ve likely heard of the Telephone Consumer Protection Act (or TCPA). This is a set of laws, regulations, and guidelines that keeps consumers safe from receiving any sort of text messages or calls from automated dialing systems without them giving prior permission.

The TCPA also covers anyone using a synthetic or prerecorded voice, which means that these rules are also in place to safeguard consumers and businesses against robocallers or being bombarded by automated SPAM texts.

The TCPA is taken very seriously and is enforced heavily with fines that range anywhere from $500 dollars upward of $1500 per illicit text message. If you don’t have a person’s consent and are sending them texts or calling them, it’s very likely you’re breaking TCPA regulations. Additionally, the burden of proof is on you if you’re accused.

When companies continue to break TCPA laws after being warned (and sometimes fined), it can result in lawsuits brought against them for continued abuse. These are typically not just normal lawsuits but instead class action lawsuits. This essentially means not just one person was injured by something, but a group of people was affected (the group is typically referred to as the class). These people file the lawsuit together and use strength in numbers, attempting to seek compensation as a group. As you can imagine, when enough people band together and seek financial damages it can add up quickly.

In this article, we’re going to take you through the top five TCPA-related class-action lawsuits in history, the companies responsible, their amounts, and some other details.

Here is the top give largest TCPA class action lawsuit settlement cases, ranked by the total amount of each settlement, culminating in the most expensive one in history.

This case was centered around plaintiff Joel Hageman. Joel claimed that AT&T called him more than 50 times in less than two years. Joel stood fast on the fact he didn’t give any sort of consent to AT&T to contact him on his cell phone (he wasn’t even an AT&T customer). To take it a step further, Joel called AT&T four times to tell them he wasn’t a customer of theirs and to please stop calling him– AT&T just didn’t listen– or so it seemed. When the situation was investigated further, it turned out that AT&T couldn’t deny the charges. The cause of the calls could actually be traced to the seemingly harmless actions being taken by a handful of clerks in an AT&T store in Montana.

At the time, AT&T’s computer system required a secondary contact phone number for all customers. AT&T’s corporate instructions if the person didn’t actually have a secondary phone number was to use all zeroes (000-000-0000). There were few people in a store in Montana that decided that instead of using the zeroes as instructed, for whatever reason, they were going to use Joel Hageman’s phone number instead. Whether this was malicious, or due to Joel’s number having some other meanings to the clerks is unclear. So Joel was actually receiving customer calls on behalf of many other AT&T customers because his number was incorrectly attached to an inordinate number of accounts as the secondary number.

AT&T Mobility was required to show documents in discovery, and after being deposed, there was a mediation session that lasted a full day. The violations racked up to $45 million dollars, and the plaintiff’s lawyer would receive $15 million of that amount in fees.

This case happened in Illinois and was against the popular charter bus company US Coachways. Believe it or not, this settlement was actually pursued largely in part by the company that insured US Coachways. Their position was that US Coachways was sending text message campaigns to potential customers without consent, which clearly violated the TCPA.

From the evidence gatherer, it seemed that US Coachways was sending a large volume of SMS messages to people who had previously asked for quotes but had never formally booked or given any consent for future contact. Additionally, they were bombarding former customers who never gave permission to be contacted by cellphone for marketing purposes.

When all was said and done, US Coachways was accused of sending around 391,459 text messages to 85,000 people without formal consent. The company’s position was indefensible– they had clearly broken TCPA guidelines. They agreed to settle the suit for $49.9 million dollars.

This lawsuit was centered around the plaintiff Thomas Krakauer against DISH Network. He claimed that a retailer that was an authorized DISH Network associate made continued telemarketing calls to his phone number even though his number was clearly listed on the Do Not Call Registry at the national level.

Because the TCPA clearly forbids calls to anyone whose number is on the Do Not Call Registry, DISH Network was absolutely in violation. In Krakauer’s opinion, DISH Network was well aware that their authorized dealers were selling the company’s satellite TV service by making illegal phone calls. He claims that he reported it to DISH Network, but the company tried to put the responsibility of compliance back onto the dealers. It was later proven that because DISH Network knew about the illicit calls, that they were considered to be trying to shield themselves legally by having the authorized dealers do their dirty work and act as a buffer between them and the TCPA. It didn’t work.

Over 51,000 calls were made to more than 18,000 phone numbers that were listed on the Do Not Call Registry on behalf of DISH Network, and they were aware, making them responsible, causing them to lose the suit and face $61 million dollars in damages.

While this suit names Capital One, it also involved three other collection agencies that were part of the second-largest TCPA class-action lawsuit to date. It goes as far back as 2012, and involves the use of automated dialers to call people’s cellphones without consent. Even though the companies were attempting debt collection, they still didn’t have permission to call these people– especially with autodialers. Every part of what they were doing violated TCPA.

More than 21 million people received calls from the autodialers in place, being bombarded by requests to pay on their credit card debt.

Capital One made their stance clear that they were “admitting no wrongdoing” but they agreed to pay $73 million dollars while the other three debt collection companies would be covering the other $2.5 million. It’s not clear as to how much money they made from their efforts of hounding people.

The Capital One class-action lawsuit held the number one position for a while until September of 2016, when the next class-action suit took the not-so-coveted first place spot, becoming the biggest TCPA lawsuit in history.

Without further ado… the number one largest TCPA suit is…

Everyone loves a free cruise, right? Turns out no (and in this case, for good reason). Caribbean Cruise Line was said to make many unsolicited robocalls that were offering free cruises to an inordinate amount of people without any sort of consent. But it gets way worse.

As it turns out, they weren’t just robocalling people, but the so-called “free cruises” were actually just a ploy to try to bait-and-switch and sell people timeshares. So not only were people getting tons of robocalls but at the bottom of it all, the “free cruises” were glorified sales presentations that were designed to try to sell people a soul-sucking scam of a timeshare. Timeshares are known to be expensive scams that lock people into contracts for years (and are often passed on to people’s children whether they want it or not). For this reason, Judge Matthew Kennelly made sure that Caribbean Cruise Lines paid for their heinous abuse of consumers to the tune of $76 million dollars in penalties.

Don’t think that just because you’re not a Fortune 500 company you’re immune to a Class action lawsuit. They’re more common than you think, and there are attorneys (and even entire law firms) that specialize in hunting down people who have been the victim of a TCPA violation. You need to have a solid safeguard in place for TCPA lawsuit protection.

Remember that the burden of proof will rest on you for every single customer that claims you text messaged them without consent. So if a law firm or attorney gathers up a group of people and comes after you with a class-action lawsuit, not only will you be required to prove consent for every last one of them– but if you are found guilty, you’ll also be responsible for a fine for every single message sent.

Don’t risk it. It’s time to use Validiform. We’ll automatically record a video of every form fill and store it on our secure servers to quickly and easily pull up and prove consent. Not only is this insurance against fraudsters, but video evidence is the clearest, easy-to-prove form of evidence that leaves no details of a person’s behavior on your site to conjecture and speculation. When you use Validiform you’ll be able to see the customer’s specific behavior on your site and see the exact moment they filled out a form.

Don’t gamble with your company’s future. For one low price, and including all the tools and support you need, start using Validiform today.